Ah, teenagers.  They are the self-claimed connoisseurs of recent trends in whatever topic interests them, from music to fandoms to even methods of communication.  If you’ve been around them in some capacity, you might be hearing some of them state that Facebook isn’t in anymore and Snapchat is all the rage. Fear not – they’ve been exaggerating. According to a recent report from the Pew Research Center, Facebook is the most popular and frequently used social media platform among teens. (By the way, the same report states that Snapchat ranks third in popularity.) This can be attributed to the fact that most teens have access to a smartphone.  The majority of teenagers (77%) surveyed have a smartphone, and out of those with a smartphone, 94% of them go online from mobile devices daily or more often. 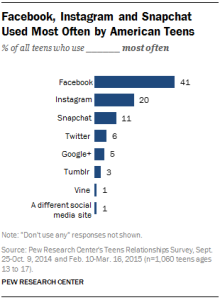 These findings contrast with the results of a report conducted in 2014 by the investment bank Piper Jeffray, which stated that Instagram is the number one social networking website used by teens at 76%.  Facebook placed third in that particular survey with 45%. Why?  Two words: Sample size.  The Pew Research report only surveyed 1060 teens, while the Piper Jeffray report surveyed 7200 teens.  As you can see above, the Pew Report surveyed its subjects in two one-month increments.  The Piper Jeffray report surveyed teens at shorter junctures in two points of the year: spring and fall of 2014. The Pew Research report also revealed that teens from a higher-income stratum are somewhat more likely to use Snapchat.   In addition, boys are more likely to play video games than girls, with 91% of boys surveyed have or having access to a game console, compared with 70% of girls.  This last fact is startling, considering that more people game (including the columnists here at Geek Spectrum!), according to a 2014 ESA study on gaming in the United States. After viewing these statistics, one can only conclude that not only posting cat pictures and filtered selfies on your wall are still in vogue among teens, but also how smartphone technology has become a large factor in their (our!) day-to-day lives.  Besides, don’t adults also post cat pictures and fawn over them?